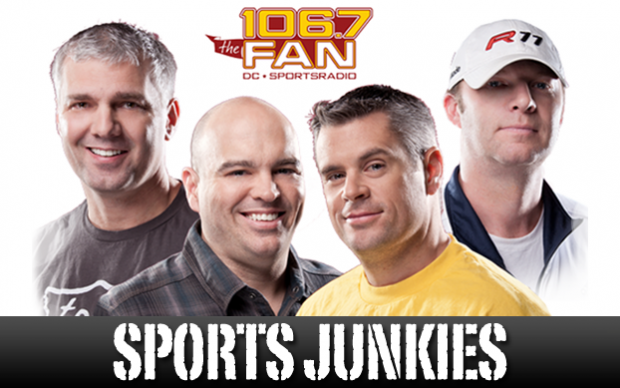 John Auville, Eric Bickel, Jason Bishop, and John-Paul Flaim, (aka the Sports Junkies) host the WJFK morning drive time radio show in the Baltimore-Washington Area.  Their show focuses on a mix of discussions about sports, women, popular culture, and the day-to-day lives of the Junkies.  The show debuted at #100 in the 2008 edition of Talkers Magazine Heavy 100, moved up to #84 in the 2009 edition and most recently #75 in the 2010 edition.

John Martin “Cakes” Auville
Known as “Cakes,” Auville studied communications at Towson University in Baltimore, Maryland, about which he is occasionally ridiculed for achieving a 1.5 GPA one semester; he then managed a local Toys Я Us store until making radio his full-time occupation in 1996.

Eric Carlton “E.B.” Bickel
Bickel aka “Gray Haired Monster” was born in 1970 and grew up in Bowie, Maryland where he grew up across the street from fellow Junkie John-Paul Flaim and in the same neighborhood as John Auville.  Bickel’s schtick includes a combustible personality, a hair-trigger temper and a penchant for botching clichés.

Jason William “Lurch Poppa” Bishop
Nicknamed “Lurch” because of his 6’6″ height (an allusion to the Frankenstein-like butler on the television show “The Addams Family”), Bishop grew up in Lanham, Maryland and befriended fellow Junkie Eric Bickel while attending DeMatha Catholic High School in Hyattsville, Maryland, where he played basketball. He enjoys body surfing, volleyball, watching Red Sox highlights, and angling. He is known to frequent Bonefish Grill in the Ashburn.

John-Paul “J.P.” Flaim
Simply known as “J.P.,” Flaim was born in 1970 and grew up across the street from fellow Junkie Eric Bickel in Bowie, Maryland. Flaim has also fought as a professional middleweight boxer.  In 2007, he was ranked 991st out of the top 999 boxers in the light middleweight division. J.P.’s performance in his professional debut earned him the nickname “Glass Joe.”