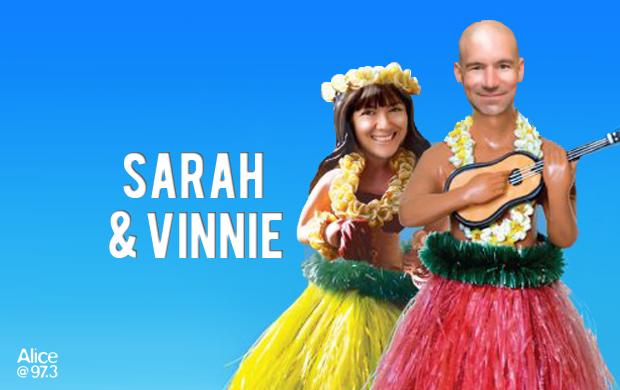 Boston native Sarah traveled a winding road to a career in radio; from a short stint in college to singing and “pretending” to play guitar to a job in her dad’s factory. But while working in the factory and listening to the radio, she heard her calling – literally.

A radio ad for a local broadcasting school caught her attention, and three months later she emerged with a “demo tape” (on an actual Memorex cassette) and landed an internship on Boston’s legendary WBCN-FM with Charles Laquidara.

For the next ten years she spent time at stations across the country including Q96FM in Orlando, KLOS in Los Angeles, and “The Point” in St. Louis.

The other half of the show, Vinnie, is a true West Coast guy. He grew up in So Cal, surfing, skateboarding, playing guitar and listening to punk rock.

Vinnie’s first full time job was at a surf shop, and his first job in radio was actually doing surf reports on San Diego’s Rock 102.1 (which later became Rock 105.3).

From the sunny shores of California, he moved onto WDRE-FM — Philly’s Modern Rock 103.9, where he first teamed up with Sarah in 1996.

After a format flip in 1997, Vinnie and Sarah headed west and took up residence on their current home on Alice 97.3 (KLLC-FM).