Posted 8 years ago by admin 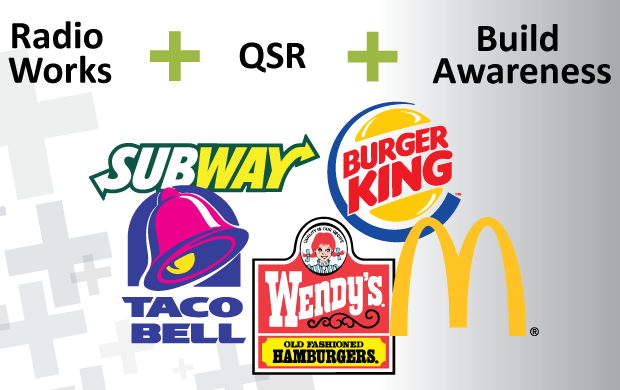 Marketing Objective
One of America’s leading Quick Serve Restaurant (QSR) chains was trying increase their “share of stomach” vs. other national fast food chains.  Their strategy was to encourage both current and potential customers to eat at the restaurant by promoting a new menu item.

The Radio Solution
In the summer of 2011, the QSR chain ran a national multimedia campaign utilizing television, online, and radio advertising. The radio campaign — emphasizing their new burger item — aired for three weeks (at 150 GRPs/week) in most U.S. markets.

Results
The restaurant’s use of radio drove incremental awareness and consideration for the new item.  Compared to patrons not reached by the radio campaign, radio-targeted patrons were:

Methodology
Katz Marketing Solutions commissioned Ipsos MediaCT to conduct online interviews with 900 fast food patrons (who reside in the same geographic footprint as the radio campaign) at the conclusion of the campaign. Data comparisons are based on patrons exposed to the radio campaign (and the other marketing channels) vs. patrons who were only exposed to the other marketing channels.