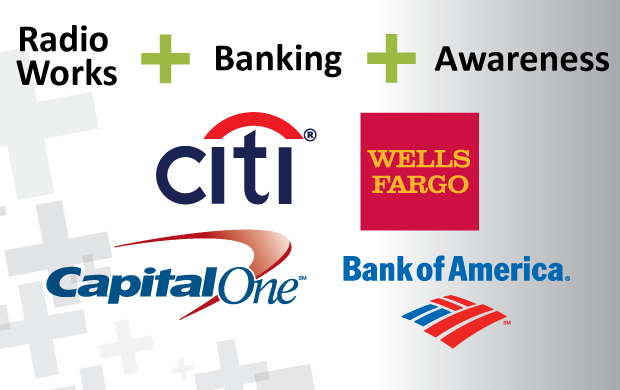 Marketing Objective
A major American financial company was attempting to penetrate the personal banking sector.  Their strategy was to generate awareness and consideration in markets where they were opening banks by promoting the rewards customers could earn if they opened an account.

The Radio Solution
In several of the largest U.S. markets, where the bank was building a footprint, they ran a multimedia campaign utilizing television, newspaper and radio advertising.  The radio campaign aired for four weeks (at 100 GRPs/week).

Results
The bank’s investment in radio advertising helped drive incremental awareness and consideration.  Compared to banking prospects not reached by the radio campaign, radio-targeted prospects were:

Methodology
Katz Marketing Solutions commissioned Ipsos MediaCT to conduct online interviews with 900 personal banking prospects (who reside in the same geographic footprint as the radio campaign) at the conclusion of the campaign. Data comparisons are based on consumers exposed to the radio campaign (and the other marketing channels) vs. consumers who were only exposed to the other marketing channels.