Home Unknown & Familiar: Inventing the Roar of a Dinosaur

Unknown & Familiar: Inventing the Roar of a Dinosaur 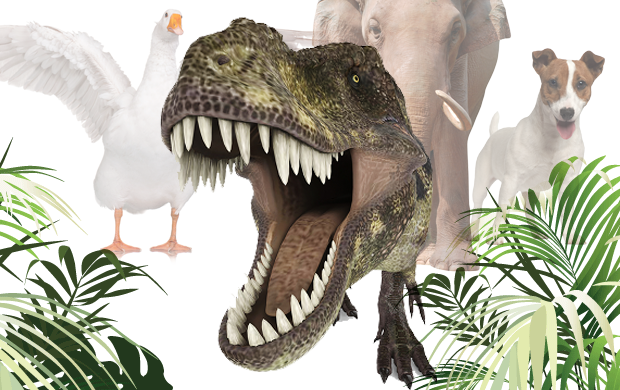 What do a Jack Russell Terrier, a baby elephant, and an angry goose share in common? They were all used to create the dinosaur sounds in “Jurassic Park” — along with dolphins, donkeys, a fire hydrant, and an exceptionally close pair of Tortoises.

The fearsome Tyrannosaurus rex is one of the biggest animals in Jurassic Park, but some of its key noises came from Rydstrom’s tiny Jack Russell terrier, Buster. “The way they animated the T. rex was very doglike, especially when it grabs the Gallimimus and the lawyer and shakes them to death,” said Rydstrom. “Every day I would see my dog playing with the rope toy and doing exactly that, pretending like he’s killing his prey.

As for that bone-shivering, theater-shaking T. rex roar: “The key element of the T. rex roar is not a full-grown elephant but a baby elephant,” said Rydstrom. “So once again, a small animal making a small sound slowed down a little bit has more interest to us than what a big animal might do.”

From Velociraptors to Triceratops – learn how all the dino sounds were made in THIS Vulture.com interview with Academy Award winning Sound Designer Gary Rydstrom.